Our Church can be found in the centre of the village. Please note that there are no public toilet facilities in the church. Apart from a few steps up to the Lychgate, there is level access to the church and the churchyard. On road car parking is available next to the Lychgate.
As well as the church, the village contains a pub, The Kings Head 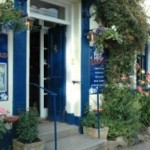 The creek at Ruan Lanihorne is a bird lovers paradise as it provides a haven for waders and waterfowl. The gentle hills and leafy lanes are a joy for walking enthusiasts and explorers.

Ruan Lanihorne, is entirely rural in character with wooded areas in the river valleys. The name Lanihorne is perhaps a modified form of Laryhorn (the Cornish name of this place). The village was, from the mid 12th century onwards, the site of a castle of the Lercedekne family. In 1334 John Lercedekne was granted permission to crenelate his already existing castle by Edward III.

The earliest connection between the Lercedekne family and Lanihorne is in the Inquisition taken at the death of Thomas Lercedekne which lists the Manor of Lanihorne as one of his holdings. The family held the castle (which was located roughly in the area between the King’s Head and the river) for a number of generations with the last of the male line, Sir Warin Lercedekne, dying in 1400. When his wife died in 1406 the lands were split and passed to the daughters. The castle fell into the control of absentee landlords and was unoccupied. By 1540 it was recorded that the castle was decaying due to lack of care. It had once been a substantial structure with seven towers and being about 50 feet in height. There were six of the towers still standing in 1700 but it is recorded that the last of the towers was demolished in 1718 with the stone being used to build houses in the village.

Agriculture and other Industry

The majority of land in the parish was used for farming with many of the farmers leasing a group of fields in two or more locations in the parish. The Glebe woods contained a quarry that provided stone for the castle and later for building Hydes Quay (the causeway road along the foreshore to Sett Bridge) and Sett Bridge itself. In the late nineteenth and early twentieth century, there was also a brickworks in the parish at Trelonk.

Ruan creek was originally a deep water creek but Tin streaming and later China Clay workings further up river, slowly silted up the River Fal and at some time when Tregony ceased to be workable as a port, vessels started to land at Ruan Lanihorne. In 1796 the Lord of the Manor leased an area of waste land to local businessmen. This was to become the Coal Yard. As part of this lease a license to build quays in front of the Coal Yard was granted.
Another quay was constructed in the late nineteenth century and is known as Hyde’s Quay. This quay was in use until the Second World War. The river has continued to silt up and the village is now only accessible at high tides by small boats and canoes.

A number of buildings spread east along the foreshore including a Carpenter’s workshop. Above this workshop was a room where newspapers were placed for villagers to read. Over time, this room as well as other parts of the building were purchased and given to the parish. The space has been used for film shows, other forms of entertainment, meetings and any other purpose needed by the parish.