In 2004 two new Lych Gate gates were made, work done on the coffin rest and new wood seats made. 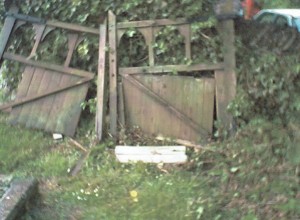